The Reserve Bank of India’s (RBI’S) moratorium on payment of equated monthly instalments (EMIS) ended on August 31. Many borrowers had deferred their EMI payments from March till August, with the assurance that their credit score would not be impacted. Manu Sehgal, business development and strategy leader, Equifax India, says, “The RBI had specified that taking an EMI moratorium would not qualify as default for the purpose of reporting to credit information companies (CICS) by the lending institutions.”Media reports indicate that many borrowers’ credit scores have slipped after they availed of the moratorium, despite the RBI’S rule. A CIBIL spokesperson says, “Lending institutions do not flag consumers who may have opted for a moratorium when they submit data to the credit bureau.” Hence, the bureaux don’t have any insight on which customers have opted for a moratorium.

If your score has been impacted negatively, know the reason. Sehgal says, “Your credit score may have been impacted for a number of reasons — applying for new credit or increase in credit utilisation rate.” If you took one type of credit during the lockdown, your score will be impacted (it’s advisable to take a mix of secured and unsecured credit). A non-banking financial company spokesperson cited three further possible reasons: “First, you may have assumed you had got an automatic moratorium, when you hadn’t. The lender had to decide who it wanted to give the moratorium to. So, your default may have been reported to the bureau. Second, many who took moratorium 1 thought they automatically got moratorium 2, when they hadn’t. Third, there could be an error on the lender’s part, which is not uncommon.” You may also have been a victim of cybercrime. If your credit score has declined, get your credit report and check for discrepancies, then decide whether to raise a dispute.

What you should do: If your credit score has slipped even though you have not defaulted on a payment, or due to EMI moratorium, there are ways to fix the problem. Navin Chandani, managing director and chief executive officer (CEO), CRIF High Mark, says, “Once you are sure about the discrepancy in your report, send an email to us with the report ID. The email should clearly mention the reference number in the subject line, details about your dispute in the mail, such as the serial number of the account in the report, account information being disputed, your contact number, and name.”

Most dispute investigations are completed within two weeks, but some may take up to 30 days. Disputes can be raised online with all the bureaux. Aarti Khanna, founder and CEO, Askcred, says, “Approach the lender, and the respective bureau simultaneously.” When a bureau takes up a dispute with the lender, the latter investigates — it accepts or rejects the dispute. If the dispute is accepted, a correction is made and the dispute is removed from the file. Credit bureau are not authorised to amend or change any data without the written consent of the lender who has provided them with the information. 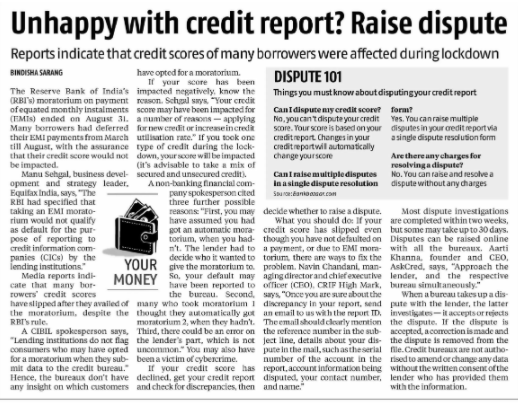