Microfinance industry ended the financial year 2019-20 on a high note with a surge in portfolio reaching Rs 23 lakh crore at a growth rate of 23 per cent over the previous year.

However, the sector grew at a sluggish pace in the first half of FY20 and picked up momentum in the third quarter and attained maximum quarter-on-quarter growth in Q4 at 9 per cent. Meanwhile, the eleventh edition of the CRIF MicroLend’s quarterly publication announced that disbursements in terms of value grew by 3.5 per cent – slower than the previous quarter and disbursements in terms of volume saw a dip in Q4. The report also mentioned that banks have been impacted significantly by early defaults, while the stress for other lenders is relatively low. Largest amount of disbursements in Q4 has been in the loans of ticket size 40,000-60,000.

COVID Impact : In terms of coronavirus pandemic, the report said that its impact could be felt in the fresh disbursements in the microfinance sector and post April as well, due to continued lockdown and moratorium announced by RBI, disbursements and collections have been known to get drastically impacted. Region-wise, the eastern region continues to dominate the market with a share of 33.1 per cent at the end of FY20, followed by south (26.8 per cent), west (14.9 per cent), north (11 per cent), central (7.8 per cent) and north-east (6.4 per cent). Tamil Nadu (14.2 per cent), West Bengal (14 per cent) and Bihar (11.16 per cent) retained their positions as the top 3 microfinance market as of March 2020. 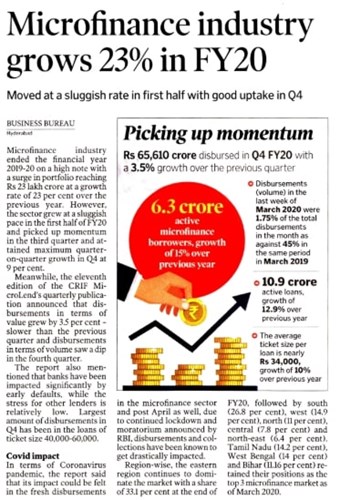