An across-the board decline in asset prices could put banks in a spot as ‘loan against property’ or LAP, a preferred credit offering from lenders, might come a cropper as collateral covers thin out. Adding to their woes is the widespread industry-level assessment that over 60 % of LAP borrowers have applied for the six-month moratorium support, a relief measure the government announced to ease stress from the severe contraction of a pandemic hit economy. Lenders now fear if debtors will start repaying once the moratorium period ends in August. “Lenders who used, LAP aggressively to grow their books could be in trouble. Many a time, these loans were given out without asking their purpose or objective. Some portions of the LAP book could be in trouble,” says Hemindra Hazari, a widely-followed banking sector expert.”

LAP is a secured loan against an immovable asset (property or land) as mortgage with the lender. Data from credit bureau Crif High Mark shows banks, non-banking financial companies (NBFCs) and other financial intermediaries have LAP outstanding worth 6.02 lakh crore as of March-end, up from 4.8 lakh crore a year ago. The combined book currently sees a delinquency rate of 3.6% in 31-90 days’ delayed-payments’ bucket. Repayments delayed past 90 days from the date due show over 5% delinquency rate. The situation is a bit tricky in the LAP book.

A good number of these loans were given to real estate developers and small business owners. These people have not done any business in the last four months. We don’t expect 100 % resumption in repayments from September,” says the corporate lending head of a mid-sized private bank. Lenders face problems on two fronts - LAP loans to developers with property as security cover and other categories of borrowers who collateralized personal properties. The first category of borrowers - the developers - is most likely to default on repayments, lenders believe.

LAP loans to developers are offered against a mortgage of land or built-up residential or commercial units. After the IL&FS crisis of end-2018, many lenders started asking for 1.2 to 1.5 times the security cover for all LAP loans offered, especially to real estate developers. But then, there are outliers here too. To bulk up their loan books in quickly, several lenders also extended loans up to 80 % of the mortgage value. Real estate consultants say asset prices have fallen 20-25% across several micro markets over the past six months.

Sale of residential units has dropped nearly 30 % in the first quarter of current fiscal and site walk-ins have come down significantly. “In times such as these, there’s no way lenders can expect to get their money back from developers who have been granted LAP. The collateral cover may not have tripped completely, but it is coming down,” says the CEO of a large NBFC. “But then, even if the cover goes below loan value, we may not be in a position to repossess the property and liquidate it.

We may not get the desired price,” the CEO added. Commercial space developers are relatively better placed as “vacancy levels” are hovering at 8 %. But rental yields of commercial property owners have dived on account of renegotiations of lease agreement by tenants. “Residential builders may continue to face headwinds in the coming months... Even though home loan rates have come off, there’s a lot of worry among prospective buyers around job losses and salary cuts. Personal income levels have also fallen. These may pull down demand for residential units,” says Samantak Das, chief economist and executive director at JLL, a real estate consulting firm. With lower sales, developers may soon be on the lookout for more working capital, but there won’t be many lenders willing to take those mandates. “There’s not much sales happening now and builders are absolutely cash-strapped. They may not be in a position to start repaying in September,” says a veteran real estate consultant.

WHEN THE MUSIC STOPS

The industry estimates over 60 % of LAP borrowers have applied for moratorium support announced by the Reserve Bank of India in two phases for a total of six months. NBFCs hold over 44% of the combined LAP book, followed by private and PSU banks with over 30% and 13% of the assets, respectively, as per data from Crif High Mark.

Besides real estate developers, LAP borrowers also comprise small business owners, farm ers and salaried individual borrowers. “The problem will come in the bottom 10% of the borrower profiles. These are borrowers who have been facing severe shortage of money,” says Kajal Gandhi, banking sector analyst at ICICI Securities. “This band of borrowers may not be able to service loans immediately, and this may kick up portfolio delinquency ratios by about 1.5% to 2%. Banks and NBFCs will have to shore-up more capital to withstand this shock,” she adds. 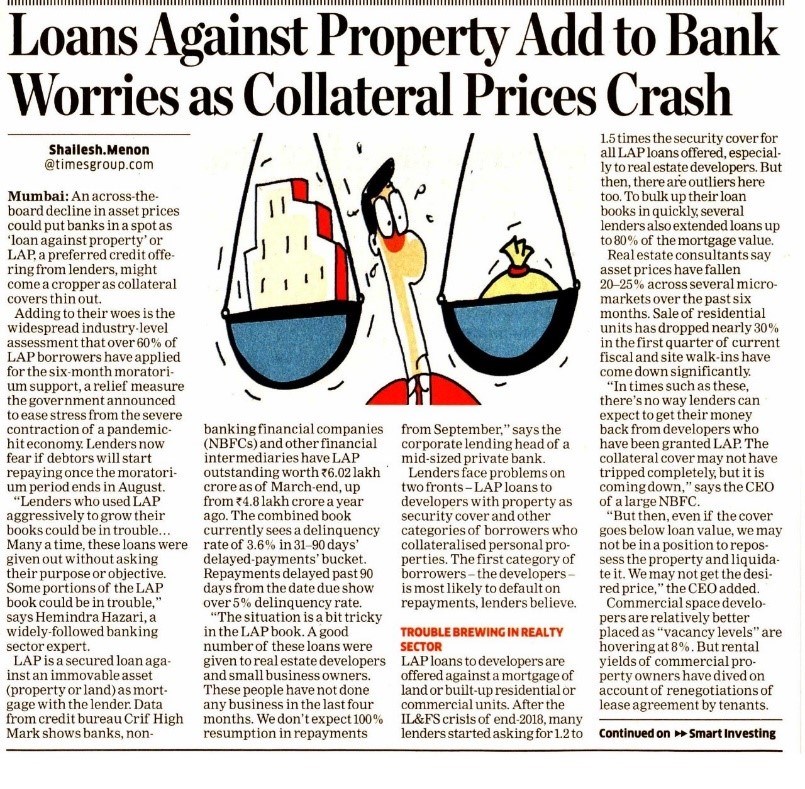 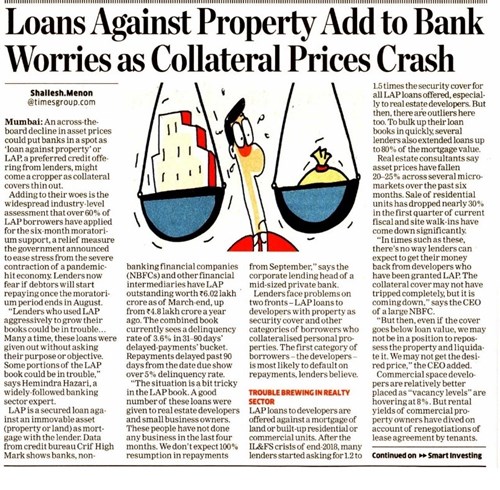