Ask Kalpana Pandey if the micro-finance industry is overheating, and the managing director and chief executive officer (CEO) of CRIF High Mark, says “the system is being designed for over leverage”. An exaggeration?

According to Microlend, which captures the industry’s trends, the national average ticket-size for microfinance loans rose by 12 per cent year-on-year (YoY) to Rs 32,500 in Q2FY20 while the average exposure per borrower grew by 5.7 per cent to Rs 34,300. Now, one way to look at it is that the universe of borrowers is turning out to be creditworthy; that microfinance institutions (MFIs) are profiling their customers better. But MFI delinquencies in Q2FY20 are also moving up.

Early delinquency levels rose to 1.3 per cent from 1 per cent in the preceding quarter though significantly lower from the 2.9 per cent YoY in the 30-day past-due (DPD) bracket. The narrative was the same in the 31-180 DPD at 1.1 per cent over the previous quarter of 0.9 per cent, and YoY at 1 per cent. So, too, the 180-day plus DPD was at 4.5 per cent, up from 4.3 per cent in the previous quarter, but lower than the 5.2 per cent a year ago. Simply put, the declining trend in delinquencies is reversing; you have whispers that the third and fourth quarters of FY20 will see these figures headed further north.

Padmaja Reddy, founder and managing director of Spandana Sphoorty says while the MFI industry may have grown to Rs 2 trillion, the share of pure-play entities is only Rs 60,000 crore. Banks, including small finance banks (SFBs), which are deep-pocketed in terms of capital with higher risk appetite, and non-banking financial companies (NBFCs) are in the game in a big way. Now this, as such, isn’t a problem, but when there is no regulatory level-playing field, it could turn out to be one.

MFI norms were framed based on the Y H Malegam Committee report of 2011 which was set up after the Andhra Pradesh crisis. Back then, the likes of HDFC Bank were not in the field nor were an L&T Finance and a Fullerton. And the committee’s recommendation that an individual cannot borrow from more than two MFIs seemed fine. So, here, did it all go wrong?

The exposure of MFIs to a single borrower was pegged at Rs 1.25 lakh, but “in hindsight, with the advent of banks, SFBs and NBFCs into the segment, it seems to be a typo-error. The regulation must have restricted it to two lenders and not two MFIs,” says Reddy. The point here is that non-MFIs are plying borrowers with loans which may not fall within the pale of how the traditionalists view it. Again, who’s to say that the same borrower isn’t part of a joint liability group (JLG). This, according to Pandey, is never tracked: “There is a growing trend of individuals moving out of JLG as well and they are the target customers of lenders, which also leads to overleverage”.

“Lenders are getting lazy. Most marketing heads prefer to go places which are well-connected”, says Reddy. States like Odisha and Rajasthan saw a barrage of new entrants in the post-demonitisation phase, but few are willing to step out of Bhubaneshwar, Cuttack, Jodhpur and Ajmer to tier-3 or tier-4 cities.

Nitin Chugh, managing director and CEO of Ujjivan SFB, says, “When too many players operate at the same time, or in a short period of time in a small market, it leads to overheating as the portfolio is built up. This will eventually lead to stress; it has happened in Assam”.

Non-MFIs have the power of cross-sell — the ability to service a customer more holistically. “MFI customers are like any other entity. It is just that when we were an MFI, we didn’t have a chance to work beyond with them (our limited base),” says Chugh, even as he makes a compelling pitch in favour of cross-selling. The practice itself doesn’t pose a risk, but then, these loans are yet to pass the test of time, and MFI borrowers with limited income sources tend to be vulnerable to debt.

Pandey points out that household indebtedness remains a grey area: “The Malegam Committee touched on household income, but lenders only factor in the creditworthiness of the individual borrowing the loan”. And while MFI loans typically have repayment tenure of less than a year, home-, education, and vehicle loans have a longer tenure. “This structure tends to distort the repayment characteristic of the borrower and leads to an uneven repayment structure. In some cases, indebtedness increases without a proportional increase in income,” notes R Bhaskar Babu, co-founder and CEO of Suryoday SFB. For LVLN Murthy, deputy CEO at Dvara KGFS, this poses a risk even when his company vends insurance. Operating as an NBFC in the hinterland of Tamil Nadu, Murthy’s concern is when his wealth managers are unable to collect the second year’s insurance premium. “Or what if the customer doesn’t even pay the loan instalment? There’s such a risk in cross-selling products,” he says. And, he draws attention to top-up loans, and even loans extended to help the borrower meet the repayment obligations.

“The regulator (Reserve Bank of India) is well-aware of these concerns, but the regulations are just where they were in 2011,” notes Reddy. Manoj Nambiar, managing director of Arohan Financial Services and chairman of the Microfinance Institutions Network says it has become necessary to relook at MFI regulations.Yes, the MFI market is overheating. And you read it here first: the central bank will soon step in. 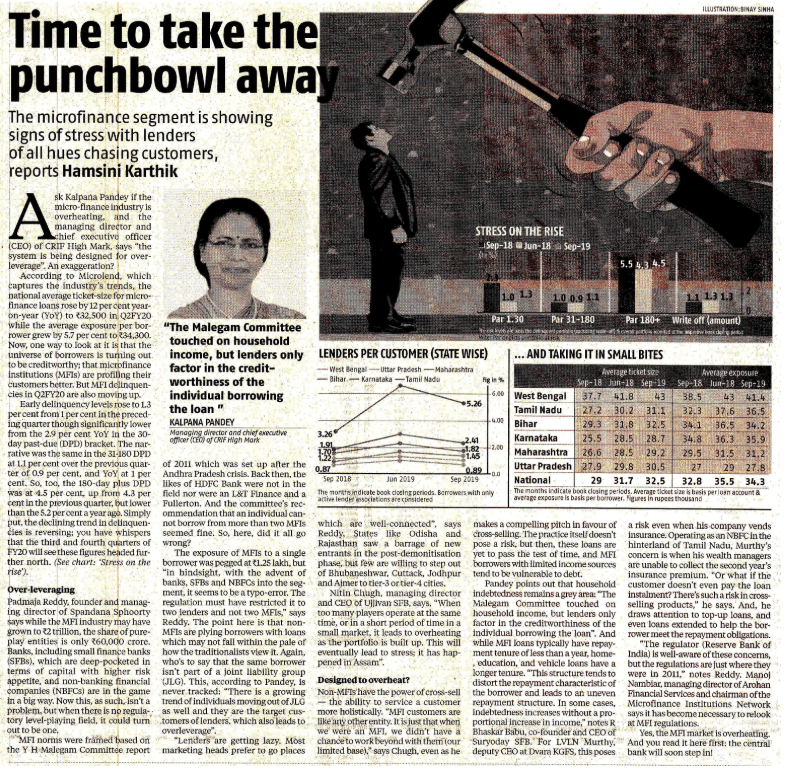 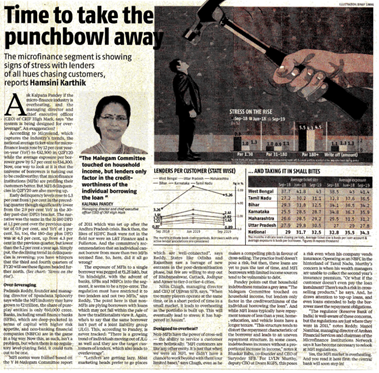