With visa restrictions and other hurdles in place for migrant job seekers, the number of Indian students seeking entry into US institutions by securing a loan rose barely 5°/o year-on-year to 1.9 lakh in financial year 2018, accor­ding to a recent report. By comparison, in the Obama years, the numbers had risen sharply from 2013-14 (1.2 lakh students) to 2016-17(1.9lakh). Despite being the top destination for Indian students, the US is not get­ting as many applicants as earlier, sa­ys the HDFC Credila survey. Student visas issued by the US have shrunk to 42,694 in 2018 from 74,831 in 2015.

Interest in heading to the US has dipped considerably since Donald Trump came to power. Instead, loans to study in non-US markets grew 20- 30% in FY18. In the Obama era, loan disbursements to students travelling totheUShad grown 25-30%.

And it's not just the US with its hostile policy regime. Many are also steering clear of the UK while they knock at the doors of institutions in Canada, Australia and Germany, which have a more liberal climate.

From just 38,000 loans granted to students in 2014 for Canadian colleges, the number has more than quadrupled to 1.7 lakh in 2018.Destination Australia has also seen a massive hike in the number of student loan grants with more than a lOO % increase to one lakh. Germany saw a 83% increase in the past five years to 17,570 loans granted in 2018. The UK, which has followed in the footsteps of the US in embracing a protectionist regime,has seen growth flattening in the past five years. The number of loans granted in 2014 (19,750)was unchanged in 2018.

While it is tough to land a visa and a job in the US, there are still STEM (science,technology, engineering and mathematics) students who want to pursue this route due to new develop­ments, say industry players. "Earlier, there were 65,000 H1B visas and 20,000 for advanced degree students. Starting this year,the computer-generated selection process will pick 65,000 from the entire pool of cap-subjected H1B petitions.Those not accepted and eli­ gible for the advanced degree exemption will be transferred to the master's cap pool for a second chance at selec­ tion. That means, international stu­ dents with advanced degrees can try their luck at the H1B lottery twice,"sa­id Ajay Bohora, co-founder and MD, HDFC Credila.

Countries that offer students a bet­ter scope to secure jobs are preferred, say bankers. For instance, Canada's Student Partners Program (SPP), where students typically get work vi­sa of three years, is a lure. BREXIT-related uncertainties are keeping Indi­an students off the UK, said Bohora. "We have also noticed a steady flow of students to Australia, New Zealand etc where fees are relatively lower."

Parents are increasingly educating themselves on employment and immigration policies before taking a loan.But only the "upper creamy lay­er of students"are the ones able to secure loans as banks tighten their pur­ses. Banks in total lent to 24.3 lakh students in 2018, down from 25.5 lakh in 2017. The volume of education loans disbursed dropped significantly by 35% between financial years 2015 and 2019, said credit bureau CRIF High Mark. "Banks have moved towards high value customers who take larger loans with more collateral. So, this single-digit growth is driven by a small­er group of students taking larger lo­an amounts not an actual increase in loanees,''said Parijat Garg of CRIF High Mark. Data from CRIF HighMa­rk shows the average size of new edu­cation loans has risen to Rs 8.9 lakh in 2018 from Rs 7 lakh.

But banks are open to overseas students whose parents offer suffici­ent collateral and assets.Corporation Bank MD V Bharathi said,"We've had higher defaults in the sub-Rs4 lakh lo­an category. We have fewer defaults when we lend to IIT, IIM or overseas students." A private bank CEO said, "Even though it doesn't sound good for optics to say we only lend to students headed to premier institutions or overseas,that is the sad truth." 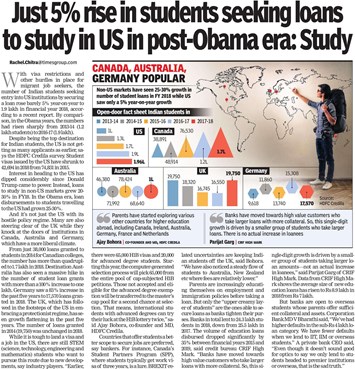