Inspired by humble entrepreneurs on an early morning cycle ride and devising strategies to solve problems at work after a bout of weightlifting, founders of startups and corporate honchos are finding ways to make fitness pay off at work, too. When he first started going to the gym a few months ago, it was quite disheartening, says Tanmay Saksena, chief operating officer of online pharmacy 1mg, especially when he saw other, fitter people. In two months, however, he found he could lift twice as much the weight than what he could at the very beginning.

“I used this outcome as an example with my teams to solve a hairy problem we were grappling with. The journey wasn’t pleasant though — just like waking up and going to the gym is hard — but about 1% progress in every session begins to stack up quickly,” he said.

Activity itself is the reward
Kabeer Biswas, CEO of delivery app Dunzo, says his 20-30km early morning cycle rides are the “most enlightening moments” of his day. “Every small business has a story to tell, and some of my most interesting conversations have been with entrepreneurs who started from scratch, during my rides through the city,” he says. These long rides — sometimes going up to 70km on weekends — give him time to think, he says. “I usually plan my day and tasks ahead while running,” says Ruchir Arora, co-founder, CollegeDekho. Arora is an ace table tennis and badminton player, and has been a regular at corporate cricket tournaments.

Team sports like these are a good way to engage with people, says Parijat Garg, senior vice president of credit rating bureau CRIF High Mark. It also taught him about accepting failure as well as understanding that others could do better, and apply this in the work environment.

Measuring results is key
Varun AV, who is the co-founder of diagnostic devices startup Inito, says he doesn’t get much time to exercise, but has lost about 20kgs in one year, ever since he started on a low-carb diet and started closely monitoring his hormone, glucose and vitamin levels using his own diagnostic devices. Varun also goes on intermittent fasts, a practice in which all meals are eaten within a narrow window of 8-12 hours. Keeping abreast of fitness also means he can offer better solutions to his consumers, he says, like busting myths such as ‘a low-fat diet is good for you’ and ‘eating small meals is good’.

Inspiring teammates to be fit
Varun’s team is involved in measuring their health trackers — some young team-mates got to know that they were pre-diabetic ever since they started measuring their glucose levels, and have changed their eating habits as a result.
Amit Tiwari, vice-president (marketing) of Havells, plays squash at least four times a week and had once inspired a bunch of colleagues and team members to take it up. “The best part of it is, most of them are still continuing after so many years,” he says.

Mindfulness on minds
Garg has ‘no-meeting Mondays’ to help him de-clutter while Saksena has downloaded a meditation app on his phone. Arora also says he is always mindful of the mental well-being of his team, and believes it has an effect on their personality and work. 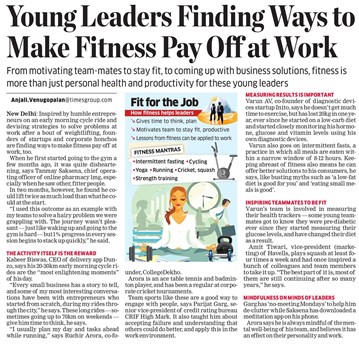