The data reveal that the drop in sanctions started from the third quarter of 2018-19.With a number of non-banking financial companies finding it difficult to get funding following the liquidity crisis, industry-wise sanction of loans fell by nearly 31 per cent in the fourth quarter of 2018-19, barring some segments such as gold and personal loans. 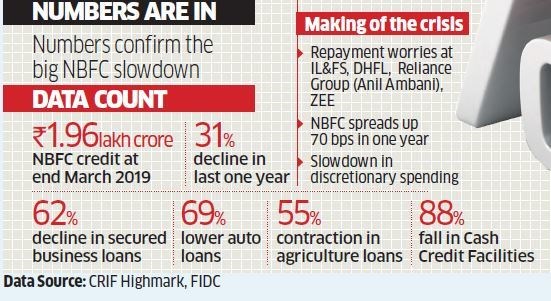 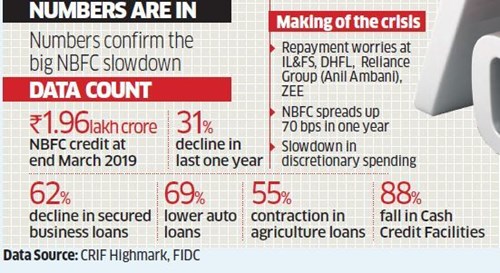 Two-wheeler loans
The sanction of two-wheeler loans, which many NBFCs extend, also declined by 15 per cent to ₹5,774.53 crore in the January to March 31 quarter, against a year ago, while loan sanctions for used cars fell by 7 per cent in the period under review to ₹1,225.81 crore. “Except gold loans, most categories dipped sharply. These are sectors having huge linkages and employment generation opportunities, such as housing, auto and commercial vehicles…the loss of jobs, too,” said Thakkar. Even for the full financial year 2018-19, industry-wise sanction of loans fell by 6.1 per cent to ₹9.06-lakh crore, compared to ₹9.65-lakh crore in 2017-18.

NBFC crisis
The data reveal that the drop in sanctions started from the third quarter of 2018-19 when some NBFCs reported defaults in repayment of debt. In the quarter ended December 31, 2018, loan sanctions by NBFCs amounted to ₹2.06-lakh crore, a decline of 16.6 per cent from ₹2.47-lakh crore in the same period in the previous fiscal.