It took about seven years for Anil Agrawal, 35, a Pune-based sales manager, to clear off four different loans he had accumulated over a period of five years. He is still paying the EMIs for a fifth loan. It all started with a personal loan of about ₹4 lakh that he took from a private bank to meet his wedding expenses in 2012. “When I took the loan, I was a salaried professional. But soon I started my own business which didn’t do well, so I went back to a job in 2014," said Agrawal. By this time, he had a huge credit card bill to repay. “Since banks weren’t approving my loans, I took one from a fintech company in 2017 to repay my credit card bill of ₹4.5 lakh. This was among five other loans I had taken, including a car loan of ₹7.5 lakh," said Agrawal. All five loans put together amounted to more than ₹15 lakh.

The sales professional found himself dangerously close to falling into a debt trap, not just because of bad planning but also because borrowing from fintech companies was easy. Agrawal is not an exception. More and more millennials are taking multiple loans as access to loans has increased with the rise in the number of lending companies.

According to a recent report by CASHe, a digital lending company, in 2018, 23% salaried millennials took short-term personal loans to refinance individual EMIs and 14% borrowed to pay off their loans. The average frequency of repeat loans was 60 days. Data from CRIF High Mark, a Mumbai-based credit bureau, shows that 44% personal loans were disbursed in FY19 to people in the 26-35 age group, and 13% to those who were 25 or below. The number of personal loans disbursed grew at 25% compounded annual growth rate (CAGR), whereas the book size for personal loans grew by 37% over the last three to four years.

Growing Trend
Digitization has transformed the way the lending industry works. All one has to do is apply online, upload a few documents and loans get disbursed within 24-36 hours, and the younger demographic seems to be more comfortable with data sharing and the concept of credit. “Zero-cost EMIs are a thing today and gadgets like mobile phones have become a necessity. Many millennials change their phones every one or two years," said Parijat Garg, senior vice-president, CRIF High Mark. Ultra short-term loans—with a tenure of a few weeks—are also easily available.

As much as 80% of the customer base of IndiaLends, an online personal loan provider, comprises millennials who seek personal loans for a host of reasons such as travel, home renovation and medical emergencies. Gaurav Chopra, founder and chief executive officer of IndiaLends, said the company witnessed an increase of 55% in loan applications for travel, of which 85% applicants were millennials. “As per another internal report, we’ve learnt that 75% millennials took loans to pay for their wedding,," said Chopra.

Three financial planners Mint spoke to said millennials buckle under peer pressure and believe in instant gratification, which tempts them to seek such loans. “The pressure to keep abreast with expensive, fancy gadgets is high and to be able to ‘fit in’, the only option is to take loans," said Lovaii Navlakhi, founder and CEO, International Money Matters Pvt. Ltd.

Planners said most millennials don’t fear that they may not be able to repay the loan as they see parents as their back-up plan. They also know that they can take another loan, if required, to pay off the current loan. “The down payment itself is done via credit card which provides an EMI option. By availing both options, the big amount is broken down into small bites which the person feels is easy to digest," said Navlakhi.

Shweta Jain, CEO and founder, Investography Pvt. Ltd , likens an unplanned loan to a drunk friend. “Everyone likes a drunk friend, but only until they start to puke. Taking loans is like that. It’s nice till a point, but it’s very easy to go overboard," said Jain.

Tipping Point
It’s not always as black and white as it may seem. “If you are taking a loan to pay for another that you got at a higher interest rate, it could be a wise step," said Garg. However, if you’re taking the second loan to repay the first because you don’t have enough money, then it could eventually lead to a pile of debt. “Sometimes, there can be a mismatch between aspiration and financial discipline. With convenient loan processes and easier availability of credit cards, it’s easy to lose perspective on earn-spend ratio," said Satyam Kumar, co-founder and CEO, LoanTap, an online lending platform. Keep in mind that instant loans can push you towards a debt trap. Garg said you should avail credit only if the total EMI and dues to be paid don’t cross less than half your in-hand income.

Often, there is no limit on the number of loans you can take, which means you need to discipline yourself. “Even if the lender is willing to offer credit, the onus of repaying lies on you. You may have borrowed from friends or family too, which the lender may not know," said Garg.

Borrow Responsibly
Delhi-based Anand Malik, 37, has been taking personal loans from a fintech company for a year now. An accident in 2017 rendered him incapable of working and he didn’t receive his salary for a month. He ended up taking a ₹20,000 loan during that phase. He took another loan after a while and a few more later to pay his credit card bills. “I’ve been associated with the company ever since. Even now when I have to make big-ticket purchases, I approach the company," said Malik. Though he does get worried about taking multiple loans, he sees them as the only option to settle outstanding dues. “I now try to avoid taking loans despite easy availability," he added.Lending companies push you to take a loan because it benefits them. “Being eligible for a series of loans or refinancing options indicates that you are an excellent revenue source for the loan provider," said Vishal Dhawan, certified financial planner and founder, Plan Ahead Wealth Advisors.

Always remember to save before you spend. Set a limit on your credit card; if you can’t do that, it’s better not to own one. Also, don’t let messages from fintechs advertising attractive interest rates sway you into taking loans. Find out the actual rate of interest you will end up paying. 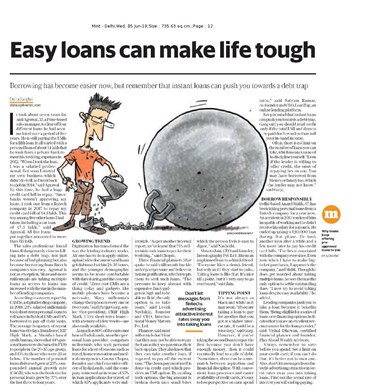