The rapid growth of the microfinance industry is leading to a scenario of over-borrowing on the part of loan seekers, putting the sector a considerable risk. According to data collated by CRIF High Mark, during the past two years, there has been a spike in the average microfinance loan ticket size, along with a number of borrowers seeking loans from multiple entities.

The average outstanding of borrowers who availed loans from four lenders increased from about Rs 60,000 to a little over Rs 81,000 between March 2017 and March 2019. Further, the average outstanding of borrowers with loans availed from five or more lenders rose from Rs 73,000 to Rs 1,02,000 in the same period. In fact, close to 20-30 per cent of applications received by micro lending institutions are now getting rejected on account of existing excess borrowing, say industry experts.

The present regulations governing over-indebtedness apply only to NBFCs-MFIs and not-for-profit MFIs. According to RBI regulations, the total loan amount to a single borrower should not exceed Rs 60,000 in the first cycle and Rs 100,000 in subsequent cycles, by not more than two microfinance lenders at a time. However, as a part of self-regulation, the MFIN (Microfinance Institutions Network) had kept the overall lending bar at Rs 60,000, which was raised to Rs 80,000 in view of the high demand for loans. 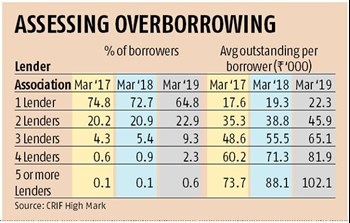 When most MFI regulations were framed between 2012 and 2015, NBFC-MFIs used to command about 70 per cent of the microloan portfolio. However, over the years, the dynamics of the MFI industry have changed. Since NBFCs (other than NBFC-MFIs), SFBs and banks are not in the purview of RBI regulations governing MFIs, and hence microlending, NBFC MFIs had been losing their lending space to these players. The MFIs are pitching for a common code of conduct to bring parity in regulations.

The microfinance industry grew at 44 per cent on a year-on-year basis as on 31st March 2019, with a gross loan portfolio of Rs 188.5 thousand crore, according to the CRIF High Mark report. Among the states, in Tamil Nadu, one of the biggest markets for microfinance, nearly 6.58 per cent of the borrowers have loans from four or more lenders as on March 2019. The percentage has grown sharply from 1.46 per cent in March 2018, the CRIF High Mark report notes.