Many banks believed lending to individuals is risk-free given they are better placed with credit scores. But the recent slowdown and vanishing jobs are upending the belief. Defaults in this segment may be the next worry though the magnitude of damage may be contained. Deepak Chopra has been regular in payments of loans all these years. Now he’s running from pillar to post to meet the obligations – be it school fees for his son or the home loan instalment. In fact, he is behind schedule on his credit card payment that his bank has been bullying him for a month now to pay up by hook or crook. The former Jet Air employee is helpless.

Chopra is not an over leveraged individual who splurged on luxury beyond his means, but he’s among the thousands of unfortunate people who took job security for granted and are left with unmanageable liabilities. Millions are joining the ranks of Chopra as the wheels of economy move slowly now. After blindly chasing individuals comforted by their regular income, the spectre of joblessness looms as companies such as Jet, RCom and Alok Industries undergo bankruptcy and the last bastion of banking – retail lending – is facing its worst crisis in a decade.

“The first casualty will be consumption loans,” says Romesh Sobti, MD, IndusInd Bank. “There is a worry over job losses but salary increases have been above inflation fortunately. A couple of years ago, there were job losses in the IT sector but it didn’t play out. This time around what is different is that if you default, your credit score takes a hit and you just cannot borrow again.” The retail edifice, built on credit information bureau data and faith that individuals behave better than corporates when it comes to honouring their repayment commitments, is under test.

While the gross retail loan portfolio has gone up by 1.37% since March 2019, the portfolio at risk, or the borrowing that could get delinquent in 91 to 180 days rose by 8 bps to 0.91% since March, shows data from CRIF High Mark, a credit information bureau.

A basis point is 0.01 percentage point. For auto loans, the portfolio at risk has risen 20 bps in the 30 to 90 day period in the last two months. If you go into retail because other loan demand is not there, then that risk will build up,” says Aditya Puri, CEO, HDFC Bank. “You have to see how much he has borrowed…. where is his income from, what is the risk of the income going away, whether it is priced well enough.” Banks, which have been pushing retail credit for more than five years because of a surge in defaults in corporate loans, have built up risks in that segment due to slack underwriting standards. There is an uptick in  defaults by individuals as their incomes are stagnating and some are losing jobs due to companies shrinking their sizes due to poor profitability and bankruptcies.
THE BELT TIGHTENING

Bajaj Finance, the gold standard in retail lending, is losing some of its sheen. And it has warned that more stress may be ahead. From being liberal in chasing individual borrowers, banks and NBFCs are turning them away fearing a rise in delinquency where it would be a lot more difficult to recover than from a corporate because of the quick erosion in the value of assets. Both salaried and unsalaried segments are moving in a secular manner,” said Rajeev Jain, MD and CEO, Bajaj Finance. “In digital products, younger customers have higher propensity to default. So, for example, we will not lend to customers below 25 years of age.”

The Pune-based company that earned its stripes in retail lending has tightened underwriting standards after provisions rose 69% in the June quarter to ?551 crore. Gross bad loans rose to 1.6% from 1.54%. New disbursements fell 12%.We are going through a volatile period,” says Bajaj’s Jain. “We will have to be watchful and agile.” The early warning signs of stress build-up in the retail loans have started surfacing. HDFC Bank adopted a cautionary stance with an increase in provisioning requirement for unsecured loans, personal loans, credit cards to 120 days from 150 days and slowed down lending in these segments.

THE BUILD-UP
Equipped with consumer credit behaviour data and an aversion to corporate lending, banks piled up on retail loans as the last resort to show growth. Mortgages, auto loans, personal loans for pleasure trips abroad and loans for durables gained traction in the past five years. Some of them even doubled their portfolio of such loans and the nimble nonbanking finance companies took advantage of easy availability of funds to build the book. The banking system exposure to unsecured loans has risen to an alltime high, RBI data shows. Credit card outstanding grew to Rs 93,600 crore at the end of May versus Rs 74,300 crore during the same period last year. Personal loans grew Rs 6.2 lakh crore versus Rs 5 lakh crore last year

For the last few years, retail loans have been the only saving grace for most banks when corporate loans have all but dried up. Data from the Reserve Bank of India showed that while corporate credit grew at a much slower pace of 6%, loans to the retail segment grew by nearly 17% in a span of one year. While retail has been growing, specific segments like mortgages and auto loans have seen disproportionate surge in banks’ books. Of the retail loan book, 20% comprises mortgage loans for State Bank of India. For HDFC Bank, 18% of its retail book is automobile loans. For Axis and ICICI Bank, mortgage is 38% and 50% of total retail loan book, respectively.


“The consumption economy is not doing so well, there is a clear impact on mortgages, but the discretionary part which is the personal loans, credit cards and unsecured loans where we don’t have a full understanding of the end use, that is growing at a very rapid pace,” said Pralay Mondal, head-retail, Axis Bank.
THE SUDDEN STOP
The going has been good for nearly a decade after the Lehman Brothers-induced meltdown that caused layoffs in many industries. But it is the job loss that is beginning to haunt lenders now. One of the biggest reasons is the slowdown in automobile and real industries. With automobile sales shrinking from the previous year, companies such as Maruti Suzuki, Renault India are laying off staff, either those who are on their rolls or on contract. Hundreds of component suppliers are also shrinking. Over ten lakh people may be laid off if the auto industry continues to slide, said Ram Venkataramani, president, Automotive Component Manufacturers Association of India. Currently, the sector employs five million people and contributes 2.3% to the country’s GDP.

Passenger vehicle sales fell 18.4% in the first quarter, and monthly passenger vehicle sales in June fell by the biggest margin in 18 years. At the end of March, NBFC credit to the auto sector fell by 69% and the gloom is also spreading to the banking sector. While another private peer Kotak Mahindra Bank recorded positive credit growth, it may be looking to pull out of the dealer financing business. “We have also found in the last two years in particular, some of the newer banks have been pretty reckless in how they lend to dealers without adequate security,” said Uday Kotak, MD of the bank. “There will come a time when we have actually quietly pulled out and let some of them carry the same.” The slowing of the economy is beginning to reflect on the individual segments too. GDP grew at its slowest pace in the past five years in the last quarter of fiscal 2019.
Bank lending to NBFCs slowed to Rs 6.2 lakh crore at the end of May against Rs 6.4 lakh crore in March. Credit disbursals by non-banking finance companies plunged by a third in the year to March after they were gripped by the liquidity squeeze following the implosion of Infrastructure Leasing & Financial Services.

FUTURE IMPERFECT?
Whether it is corporate or retail, the choice of credit decides on how well the portfolio performs. “If I am buying horses, all of my portfolio should be horses, there should be no donkeys in the portfolio,” says Puri. “If you treat consumer loans like biscuits, then paisa hajam khel khatam.” The attractiveness of retail lending is that it is high yielding and relatively safer as individuals work overtime to avoid default since it is a taboo in the society. Loans against property, which is for small businesses, or investments in stock markets, are the riskiest.

Others such as personal loans, credit cards are as good as unrecoverable in case of defaults. Huge profitability of retail lending and excessive liquidity have led to crowding of the segment and dilution of standards of underwriting to capture business. While a lot of exuberance and confidence came from the availability of credit information bureau scores, banks may have to look beyond the credit scores if they have to protect their portfolios from massive defaults. The credit bureaus a The credit bureaus appear to be as relevant as the credit rating companies when it comes to corporate loans. In a sense, they are backward looking rather than assessing the current credit position.
“Cibil score alone is not enough,” says Puri of HDFC Bank. “You have to see how much he has borrowed, where is his income from, what is the risk of the income going away, whether it is priced well enough,”.One such suggestion is that apart from looking at the credit scores, banks may begin to assess the background and credit standing of the employer itself given that many defaults happen because of the employer going bust. “The additional vector of the employer profile should also be added, where is he working, the mobility issue also has to be factored in ... people change jobs due to salary movements. This aspect is true of the salaried base, mobility, employer profile, wage growth and job losses should be factored in,” says Sobti.
The pain on banks may be a lot less severe than what they faced with the corporate loans because these loans are less chunky. But the irony is that even a small portion could inflict severe pain. “I always tell my team, don’t tell me that 90% of the portfolio is good, you just need the last 2-3% to go bad to be out of business,” says Mondal. 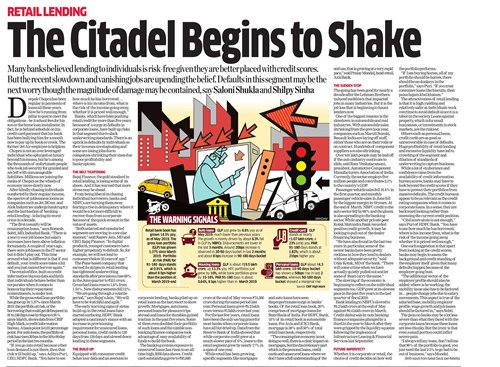 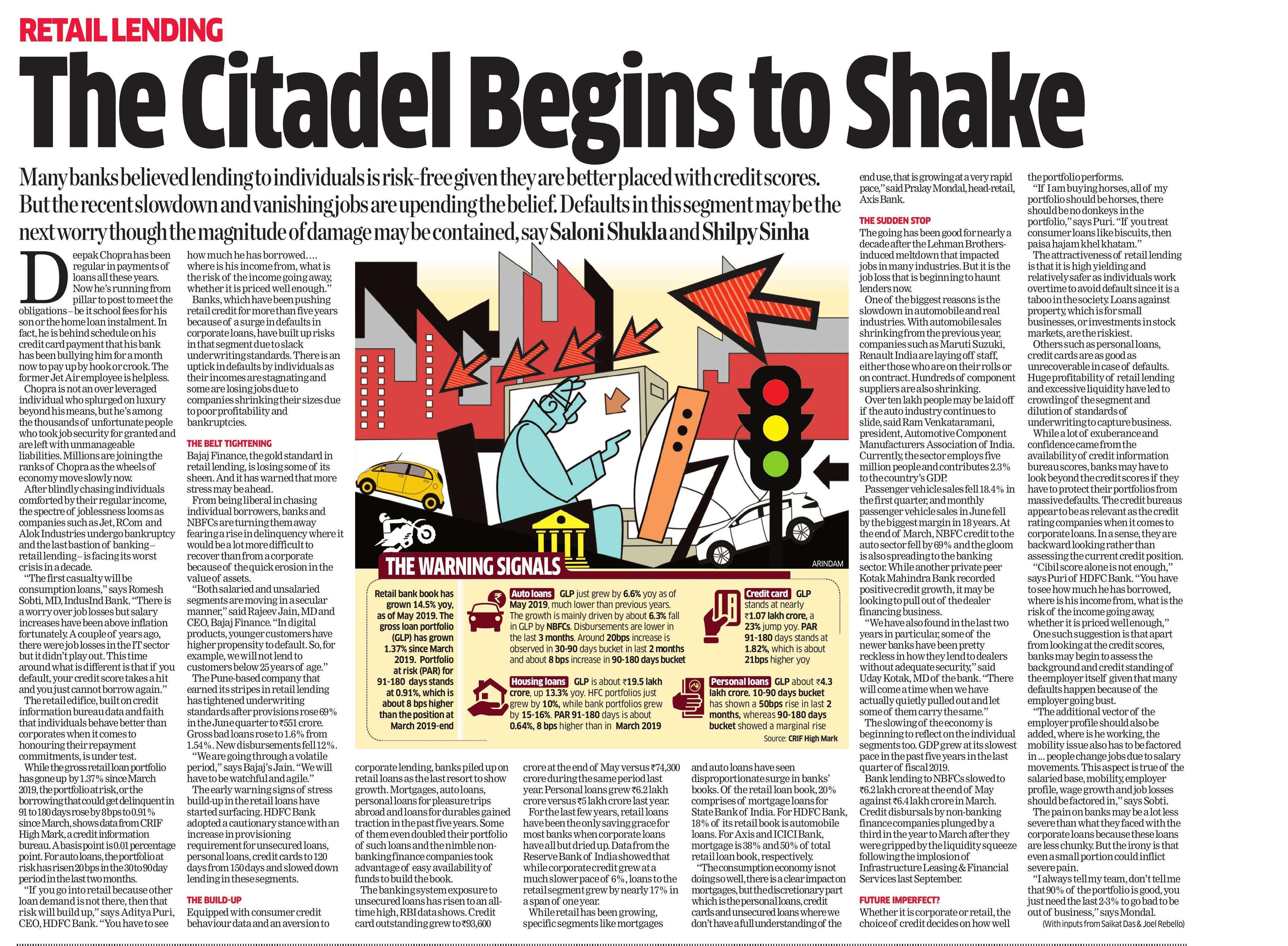