The liquidity crisis at NBFCs triggered by the bankruptcy of IL&FS and the Supreme Court verdict banning use of the Aadhaar data for financial transactions have led to a 15 per cent drop in micro-lending by financial institutions for the December 2018 quarter.

Disbursements stood at Rs 41,840 crore for the third quarter of the fiscal year, down from Rs 49,450 crore in the preceding three months, data from the credit information company Crif High Mark showed.

"There were two major changes during the quarter which may have resulted in the decline. First was the liquidity trouble, which subsided towards the end of the quarter, and the second was the Aadhaar verdict," its VP Parijat Garg said.

Garg said the Aadhaar verdict, which prohibits all financial institutions including NBFCs from storing users' data, resulted in a fall in disbursements and also in a fall in the share of NBFC-MFI lenders in the microloans to 34.79 per cent in the December quarter as against 35.32 per cent in the March 2018 quarter.

On the liquidity troubles, he said a majority of lending happens based on funding support from outside which means the overall liquidity has a bearing on the disbursements, pointing out that all other things including MFIs networks have been intact.

The company classifies micro-loans as ones which are given on a joint group lending model. On the asset quality front, there has been an improvement in the loans overdue for 31 to 180 days period, to 1.05 per cent from 1.59 per cent as of March 2018, but Tamil Nadu has seen some spike in stress.

Non-payment of up to 30 days has shot up to 2.9 per cent in Tamil Nadu as of end December from 0.92 per cent in March, the company said, attributing it to the cyclone Gajas after-effects, it said, adding Kerala, which had seen a huge spike in stress following the worst deluge in a century last August, is tempering down now.

Meanwhile, it what may result in greater concerns, there has been a spike in number of borrowers having more than four loans in Tamil Nadu to 7.62 per cent as of December from 3 per cent in March.

Garg said Tamil Nadu is already a mature market from the perspective of MFIs, but aggressive play by banks, which are allowed to sign up as many borrowers as possible unlike NBFC-MFIs where a borrower cannot borrow from more than two entities, may have resulted in the increase.  Tamil Nadu, Bengal, Karnataka, Bihar and Maharashtra are the five biggest states, accounting for 55 per cent of the gross loan portfolio. 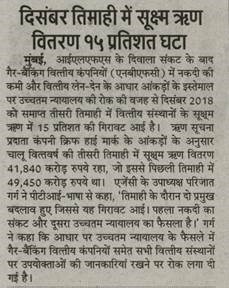