Bankers said the rise in retail NPAs is a reflection of the current tough economic environment which is impacting individual borrowers. “The repayment capacity of some borrowers has been impacted due to job losses. The NBFC crisis also has a role to play especially in consumer durable loans which they dominate because their collection capacity has been hit. In auto loans many of them would be commercial loans like taken by taxi drivers,” said Virendra Sethi, head retail loans, Bank of Baroda. 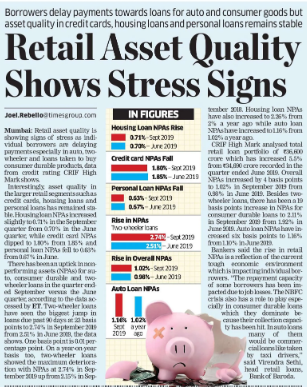