With the rising number of fintech companies in the lending space, access to credit has become convenient for everyone, including students. A new credit card product from SlicePay, a Bengaluru-based startup, focuses on collateral-free micro lending to students and some other categories. Jitendra Soni, 22, an engineering student from Bengaluru has been using the SlicePay card since May this year. “My college fee is quite high so my parents (based in Kolkata) weren’t able to send me money for other expenses whenever I asked them. I would have to borrow money from friends which I didn’t like," said Soni.

Earlier, he would purchase goods and services through the app, which is linked to over 5 million merchants, including Flipkart, Bookmyshow and Paytm. He can now use the Slicepay card at merchant establishments as well. “My present credit limit is ₹40,000 and I’ve always repaid the bill on time as my parents send the money at some point every month," said Soni. While Soni is wise enough to pay up his bills on time, easy access to credit at an early age could be dangerous. So think before going for this card. We give you the details.

The Slicepay card
A student has to submit his college ID, address proof and an identity proof for the KYC process. The fintech then applies various other filters such as data from the customer’s mobile and social networking platforms to decide whether the student is eligible for the card or not. “Banks use about 20-30 parameters, including account statements and CIBIL score. We don’t look at such parameters because someone has to lend to customers who don’t have a salary slip or a CIBIL score," said Rajan Bajaj, founder and chief executive officer, SlicePay. Once the KYC process is completed, the student will get the card, and will need to complete the one-time card activation process through the SlicePay app.

The company offers a credit limit of up to ₹60,000 to college students, but the limit varies from person to person. If you’ve just onboarded the platform, your credit limit could be lower and would increase based on how punctual you are with your repayments. The SlicePay card also offers no-cost EMIs—similar to the ones offered by popular platforms like Amazon and Flipkart—of up to six months when you buy products from select merchants through the app. Unlike other credit cards, the SlicePay card does not have a “minimum amount due" option. If you don’t repay within the billing cycle, you’re given a window up to five days to pay up. On the fifth day, your bill will automatically get converted into an EMI. You can choose any repayment duration of up to 12 months.

“For longer tenure EMIs, interest will vary based on the customer profile. Typically, for 12 months, the interest charged on the EMI will be in the range of 12-15%. For six months, it would be about 6-8% of transaction amount. In a 12-month EMI plan for a ₹10,000 bill, APR (annual rate charged for borrowing) could go up to ₹1,500 extra on the total amount," said Bajaj. In comparison, the interest rate charged by credit cards for a period of 12 months is 24-42%, according to data from online marketplace Paisabazaar.com’s website.

If you don’t pay your EMIs on time, reminders would be sent to you. You’re given a three-day window to pay your EMI; a penalty kicks in from the fourth day of non-payment if the bill amount is more than ₹250. You are required to pay ₹20 per day plus the interest and this can go up to a maximum of ₹2,000. Further, a company representive may approach you in person to find a way out.

Also, there is no prepayment penalty in case you want to close the loan earlier. “Credit card EMI schemes may have a prepayment penalty clause where you get charged an the amount for prepaying on your outstanding principal amount. But as a bank’s loyal customer and credit card holder, you can negotiate with your bank for a waiver of this penalty," said Navin Chandani, chief business officer, Bankbazaar.

Does it work?
The app has a virtual card which eases the payment method. Parijat Garg, senior vice-president, CRIF High Mark, a credit information company, said credit helps one fill any temporary financing gaps. This is a positive step towards bringing people into the credit fold when traditional lenders may not be willing to, said Hrushikesh Mehta, country manager, ClearScore, a credit information company. While this is true, is it okay to expose students to credit to meet their lifestyle expenses? “Learning to use credit from an early age makes you aware about the possibilities of availing it at a later stage for more important decisions such as business or housing,"said Garg.

However, at a young age, it is also easy to get tempted to borrow more than you can afford. Moreover, there is no parent supervision involved. “Since it’s so simple (to get credit), the student may not realise the impact of missing payments," said Garg. Shweta Jain, CEO and founder, Investography Pvt. Ltd, said this is a product students could do without. She said exposing students to credit during their formative years could lead to a generation that is addicted to it. “It is dangerous to give students such power without giving them the necessary lessons," said Jain. It’s difficult to resist temptation and stay away from peer pressure but understand that delayed gratification is better than suffering in a pool of debt. 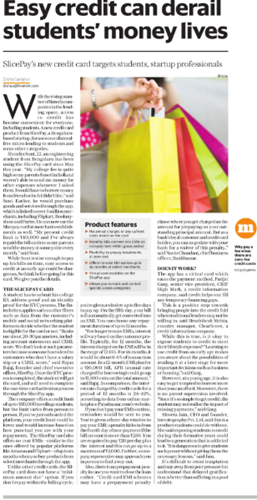