The last time a slower retail credit disbursement by banks in the first half of a year was seen between January and June 2014 when a credit growth of 6.4% was registered; the same period when BJP-led NDA formed its first government with a record mandate. The slowing growth in retail loans comes despite 75 bps of repo rate cut in three consecutive monetary policies by the Reserve Bank of India since governor Shaktikanta Das took over reigns in December last year. The rate cuts were made to boost consumption in the economy in the hope that cheaper borrowing rates would transmit to lower-priced loans to end consumers. The central bank is widely expected to announce a further 25-bps cut in their upcoming policy on Wednesday. One basis point is equal to 0.01 percentage point.

Sales slowdown in sectors such as auto and signs of preliminary stress building up in several retail loan portfolios such as personal loans and credit cards may have caused for disbursements to have slowed down, as per bankers that ET spoke with. “We have seen a slight uptick in delinquencies in certain personal loan segments,” a top private sector banker had told ET after their June quarter results. “While these upticks are not particularly alarming, our lending to segments such as auto and unsecured personal loans have been more prudential and based on stricter risk assessments.”

Retail Loan Growth Slips to 5-Year Low
“Evidently, there has been a distinct slowdown in the economy which was reflected in a lower GDP growth of 6.8% in FY19,” Deepak Parekh, chairman HDFC, told shareholders at the annual general meeting on Friday speaking of a slowing economy affecting consumption growth. However, the industry veteran believed the slowdown to be temporary. “While there has been an across-the-board slowdown in consumption, given the inherent demand and low penetration levels, I do believe this is temporary in nature.”

Early signs of stress in these portfolios emanating from a sluggish consumption demand may be showing now as credit bureau data also suggests a build up of risk. Portfolios at Risk (PAR) in May or those asset classes which may see delinquency in the next 90-180 days stood at 0.91%, about 8 bps higher than in March, as per data sourced from credit bureau CRIF High Mark. For auto loans, the portfolio at risk has risen 20 bps in the 30-90 days period between March and May. The PAR 90-180 days for outstanding credit card loans stood at 1.82%, 21 bps higher than the same period last year, CRIF data showed. 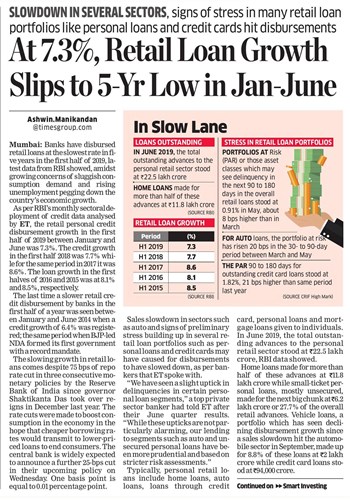