The ticket-size of educational loans in India has risen 47% in the last fiscal year despite a fall in the number of students seeking assistance, illustrating that top university and college programmes are becoming increasingly costlier in the country.

Loan disbursals climbed 9.25% in FY18 to touch a portfolio size of Rs 82,600 crore as of March 2018, said a report by credit bureau CRIF HighMark. The number of students availing loans has fallen 7% to 2.5 lakh. The average amount disbursed to an applicant has climbed to Rs 9.6 lakh this year from Rs 6.8 lakh last year.

Parijat Garg, VP (Marketing) at CRIF HighMark, said: “Ticket sizes are going up as higher education is becoming costlier. More students are going abroad now. The fees at premier Indian institutions such as IIMs and ISB have also gone up significantly over past few years. Sourcing volume in the 20L+ segment has grown by six times over the last 5 years.” While more than half of all loans are up to Rs 4 lakh, this is also the sector that has the highest NPAs.

“Loans up to Rs 4 lakh, which are marked as priority sector lending, show higher NPAs: 85% of the total NPAs are in this ticket segment. Loans up to Rs 2 lakh show 11.61% NPA,” said Garg. Bankers are now more reluctant to lend to this segment, which is one of the reasons volumes in this segment have steeply declined. “It becomes difficult for banks to locate and chase students after the completion of the course and the moratorium period,” said Garg.

Public sector banks continue to dominate the education loan space, with nearly 83% market share, a decline from 90% last year. A top official from State Bank of India, who did not want to be named, said that both ticket sizes and volumes had been going up at SBI. “We have nearly 30% market share and we don’t focus on a particular segment. And we meet more than 95% of the disbursement targets set by the government.” The official said that the Credit Guarantee Fund Scheme for Education Loans (CGFSEL) had been a big enabler in giving out loans. The scheme gives 75% guarantee for loans up to Rs 7.5 lakh.

However, this scheme has only been in effect since September 2015, and the payback period for loans given under this scheme has not started. Garg, however, differed: “Awareness of such schemes is low among students. And the process of education loan approval is still not friendly especially given parents are involved – for students, time is of essence.” “NBFCs take 10-15 days to process educational loans vis-à-vis 15-21 days for PSBs because of the extensive use of technology,” said C S Sudheer, founder of financial information website Indianmoney.com

Despite volumes going up, the SBI official said that the numbers were lower than 5-6 years ago. “The industry was bullish about IT placements earlier, but that has changed now. The pipeline has narrowed as well, because more students are now shifting to pure sciences and humanities. 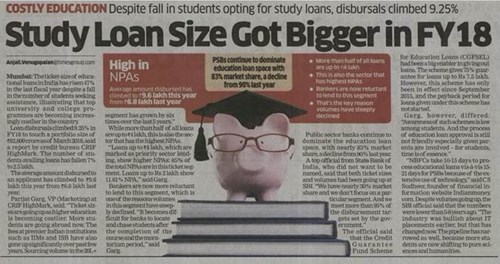